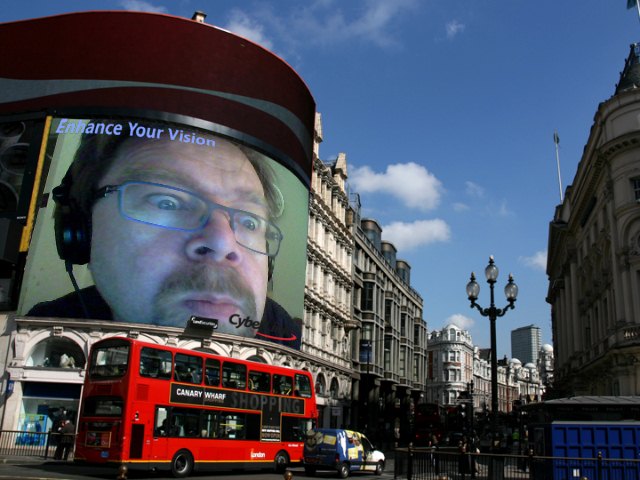 The argument is in reality an argument for sameness. Don't have any differences, diversity or experimentation anywhere, because the risk is it might turn out to be too good, and then people in other areas will complain that they are victims of the postcode lottery.

This is a stupid argument and symbolises a lot of what is wrong with our "choice" based public service culture.

The ability to develop different types of services and to experiment locally is vital. Indeed if we eliminate the "postcode lottery" there can be no such thing as localism.

But I'm going to use this postcode lottery argument, for I feel I have a higher calling.

I am a victim of the postcode lottery and it's affecting my life chances and social status.

My postcode is not SW1 1AA!

The woman  who currently lives there has the advantage of this postcode. If I had her postcode - I would be the Queen. But I don't, so I'm not.

Mr Benn had been feeling better over the last day and was wondering whether he really needed to be going for a psychaitric assessment, but, in their effort to help, everyone at the GPs surgery was very insistent that he at least tried it.

As Mr Benn approached the door of the assessment centre, a woman came running out and said, " Oh the 2.30 - look, won't be a minute, go in, lie on the couch, will be with you directly." With that she scuttled off down the road.

Mr Benn walked in, got himself comfortable on the couch and waited.

Just then, the shopkeeper appeared.

Mr Benn screamed and passed out, dreaming of travelling down endless hospital corridors, he had a white coat and a stethoscope around his neck. This was another "adventure".

He awoke, relieved to find himself in a hospital waiting area, he stood up and paced around.  He couldn't quitre remember what had happened at the psychaitric assessment centre, or since. He couldn't really remember why he was at the hospital - "tests I suppose" he thought to himself, "having some tests".

In the room were a number of poeple like himself wearing gowns. He recognised these people. There was Blackbeard the pirate, his old astronaut friend, the King of Arabia and others.

"What are you all doing here?" asked Mr Benn.

"We live here Mr Benn - and now so do you." sang everyone in unison.

There was a look of sorrow in his eyes,

It seems to me that it is the acts, decisions, behaviour, and even the sheer existence of managers that cause public services and so many other businesses to be as bad and expensive as they are.
Bit extreme?
I don't think so. I'm not criticising the people themselves. Although I believe that at least a few managers, at least occasionally, realise that what they are actually doing is creating high cost, low quality services. We've seen it in local government, the health service, housing associations, and all manner of other more commercial businesses.
Our modern conception of management is basically the same one devised by Frederick Winslow Taylor over 100 years ago. 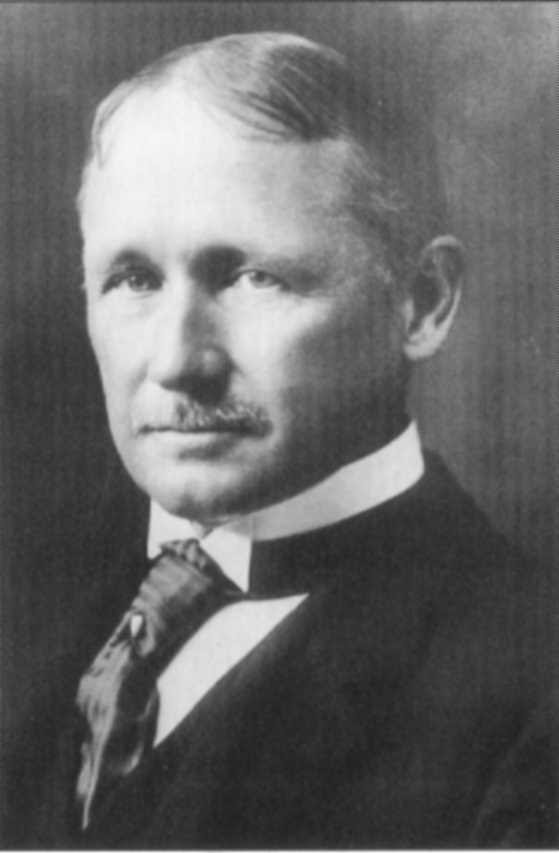 That's him.
He devised Scientific Management. He was very important and his ideas, together with those of Henry Ford, led to leaps in the way manufacturing, commercial services and government administration is organised. A very important change in thinking which revolutionised the way organisations work. The basic principles remain the same today embedded in this command and control philosophy. Top down functional hierarchies, controls, such as performance management frameworks with their "baskets " of Performance Indicators and SMART targets, and Golden Threads, cascading objectives, Mission Statements and the ultimate insult to humanity - "corporate behaviours" (where people are sent on courses to teach them how to empathise!) Bloated Human Resources departments, and Organisational Development & Business Improvement Directorates. It all seems so normal, so par for the course, making up the hegemonic values - the tacit assumptions and "common sense" of modern management.

However, a new revolution in management thinking is now needed. Indeed it has begun.
Systems Thinking is not understood by most managers. It will be considered alongside project management approaches like 'Prince 2' and becoming more popular - "Lean" as another tool or set of tools.  But it is not a tool. It is different way - markedly different from the last 100 years of management thinking. You can't apply it using the same tired old assumptions, half baked methodology and flawed psychology. You can't add it  to your toolbox!
'Management' has to unlearn everything it thinks it knows, including most of what is taught on MBAs.

At Waterstones the book shop recently I couldn't find a book I was looking for (It was Jeanette Winterson's autobiography "Why be happy when you could be normal" and it was to be a present) so seeing a computer terminal I looked it up and found it at £8.00 on a list on the web site. At the same time my son found the actual book in the store, but marked at £14.00. I went and enquired with the cheerful scandanavian guy on the till.

"Unfortunately if you buy it from the shop it is £14. £8 is the price if you buy it off the web site." there was a pause as I absorbed the information.

"We can order it for you and you can pick it up from here." He said smiling and before I could speak he said "Yes, I know it's mad."

"Can't I order it? - take this one and you can replace the book with the one ordered off your web site when it comes in?"

What was happening was I was being channel shifted. The consequence was that I did actually shift my purchasing channel. I ordered it from Amazon for £7.

Our host had been dredging up old jokes all evening. Everyone thought him sooooooo amusing. I didn't get a look in. Surely they couldn't be impressed by this.
He has a quick line every time. But the jokes are old. I thought of them and disregarded them immediately.

An emergency vehicle, probably an ambulance, goes by outside all sirens wailing, and conversation dies down as it passes. I can see he is ready to pounce with another amusing joke about the lack of success the ice cream purveyor would have travelling at high speed. So I quickly jump in. This will slay them! Just as our host begins to utter, "He'll never..", I loudly and speedily (to ensure I get in before he finishes the joke) proclaim, "That Ambulance, even if it were stationary would sell no ice cream because...."[pause] "...it is an ambulance!"

No one knows what I'm talking about.

They are a shit audience.

The comfort of hopelessness

I went to see Arsenal the other night. They were playing AC Milan in the Champions League. It was the 2nd of a two legged tie and Arsenal had lost the first leg 4-0. I had bought tickets prior to the first game taking place. Had I known we would be going into the game losing 4-0, I may not have bothered - not at these prices! But too late, tickets already bought so went along with my mate, Morty.

There was no tension or stress becasue we knew we were out of the Champions League. It was a hopeless task. We were sure we could not beat AC Milan by the required 5 goals to nil.
So rather than be stressed, nervous and on edge, and because this was a foregone conclusion, a match we'd already lost, a hopeless situation, we were pretty relaxed. Just hoping for a bit of entertainment.

By half time we were winning 3-0, the atmosphere was so electric it would have powered Bonio's light show.

But with hope came stressfulness.

When the situation was hopeless the evening had potential to be relaxing and enjoyable, in a resigned kind of way. Now there was hope. Now there were expectations. We now needed to get another goal to go level and force extra time, or two to win the tie.

We didn't. But the 2nd half was much more tense and stressful.

Sometimes there is comfort in hopelessness.

And having hope is just sometimes not worth the stress.

The secret of the magic portal in the changing room

It was hard being a magic shopkeeper in a fancy dress shop with a magic portal in the changing room.
For a start he didn't like wearing the fez.
The consequences of the choice of head attire, made so many years ago,were with him everyday.
If only he'd bothered to read the contract properly. Maybe if he'd used an agent or solicitor. He had been unaware of the permanence of the clothing choice made on his first day as "The Shopkeeper". 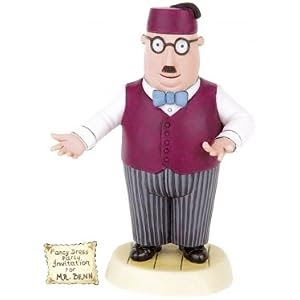 All the time he had to wear this ridiculous outfit with the fez! The fucking fez!

So why on earth is it surprising that he would want to share his pain? Having to go through this was ok the first few times. But the constant pain of appearing, disappearing and wearing a fez all to serve one man some "adventures" was borne alone. No one to talk to or share in his misery.

Mr Benn was to sample the horror of an incomprehensible existence. All he had to do is find a way to make Mr Benn question his own ludicrous existence, to become self aware. With self awareness comes misery.

Once the shopkeeper had achieved this, he would at least have someone with whom to share his misery. He would then at least not be alone  - in a fez.

Alone in a fez is the most alone anyone can be.

So his plan was to help Mr Benn to question. Until now Mr Benn had simply accepted the situation:
He happily did this for years without question. Never once did he turn to the shopkeeper and say,"This is all very odd" or anything that suggested he didn't accept this as all completely normal. This infuriated the fez wearing man.

"Is Benn a simpleton?" he thought to himself. "Has he no critical faculties or curiosity about how this all works?"

The answer had been,"apparently not."

So the task the shopkeeper set himself was to turn this simple, happy man, who breezed through his smartly dressed life without much care, into someone who questioned and pondered the meaning, but also to bring him to the verge of breakdown. The shopkeeper needed Mr Benn to feel the pain. "Then" thought the shopkeeper, "I will no longer be alone."

He would use the portal.

The portal, usually based in the changing room of the fancy dress shop, holds a secret known only to the shopkeeper.